Testing the Threads of Time

i am running not quite as early as i want again today. but at least i did a pretty thorough vocal warm-up beforehand. maybe it is something about the Robot Immigrants coming to the Armory today and meeting with them after, but my warm-up was similar to the ones we do in our process. usually i do yoga because my body tweaks out a little sitting on that stool in one position for so long, but yoga hasn’t quite been solving that in its entirety. although i am building my core back up so that i can sustain the position (and minimize the pain and damage to my body), i realized from the last Event that i needed to work out my articulators a little more to maintain the extended verbal space that i am filling. so my warm-up today actually became a combination of both physical stretching and releasing, and voice warming and exercising.

in the very end of my warm-up, one of my cats (Salvador, the moustachioed fellow) came and sat on my lap. 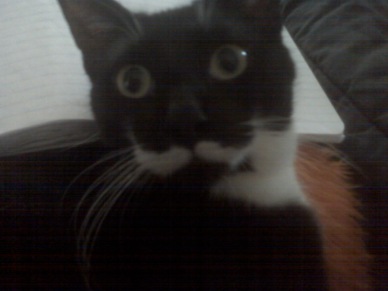 “no!” i cried to him. “i have to get up and get ready. you always do this at the last minute.”

he purred in response.

i couldn’t help but laugh and let him be, thinking maybe this is exactly where i need to be right now. (seeing as that was where i was anyway.)

and then i realized how nice it was to sit there with him and vocalize. he was contentedly responding to every sound i made. i wondered if he would enjoy it if i read to him as we do with the pigeons and why i’ve never thought of reading to him before.

does that seem strange? well, it is only as strange as going to work to read to birds. and every time i go to the event of a thread, i end of feeling strangely fulfilled by the experience.

then there was today’s experience in the Armory.

Time: it is amazing how we can feel and sense time. i wonder if we would all be happier if we operated on a shared sense of personal time rather than our scientifically-constructed standardized time. or would that give individuals too much agency? it makes me wonder. Julius Caesar converted Roman society from the Paleolithic lunar calendar to the solar one. Pope Gregory XIII introduced the Gregorian calendar, which is now the most commonly used in the world. The Judeo-Christian belief, based on the Bible, is that time is linear.

was standardized time created by ancient governments as a way to control people? by organizing the vast universal concept of time, did we become subservient to a system that actually doesn’t exist?

and here i will battle the conventions of time versus my experience of it:

i arrived at the Armory 20 minutes early. not quite the longed for 30 minutes, but progress nonetheless. i even had time to pee, stretch out my back and show up “to work” right before the doors opened. i chuckled as i amused myself doing “pigeon pose” in the green room before going out to meet my feathered friends.

the Event felt long today but it was a deeply conscious experience. (and perhaps this is why it felt long…) i felt very intellectually aware of the text and my brain seemed to be naturally finding the patterns where the text lined up to make “sense.” the scroll’s text is not written in any particularly coherent manner; most people probably don’t realize this unless they take a close look at the typography. and we have the freedom to read it however we choose. so today i found coherent patterns of connected text, while shifting back and forth between reading for the pigeons and staying connected to fellow reader, Gabel Eiben. i recalled our instructions about how to read, which i review before every shift:

“Your address is to the pigeons: one species bound by gravity to another whose capacity for flight provokes irreconcilable longings in the other, part explanation, part impossible communication.”

today i asked the pigeons a lot of questions inspired by Aristotle, “How is digestion so fast?” and “What then is the soul?”

they were calm today. perhaps it was because of the reading or simply because it was the first shift of the day. i found myself watching them often, finding answers in their movement. when i was really reading to them, trying to reach some level of shared understanding, i could hear Gabel’s voice anchoring me in some realm of human awareness. when i caught myself listening too hard and actively playing with our human words and voices, i would lose sight of what the pigeons were trying to say.

i feel it is often better to opt for that which is not so easily heard, for reaching out to those things below the surface that aren’t normally given a voice. do they not still have one even if we don’t hear it? might we learn something if we listen with the utmost care?

my thesis partners came today and we had a project meeting underneath the beautiful billowing curtain. Tinu brought me a rose. i made them robot cookies. and i serendipitously ran into Lindsay Abromaitis-Smith. in hugging her, i can feel so much internal strength and spirit. all of these things bring such great inspiration and joy. i leave today feeling very appreciative for my life, for the lives of others, and for those quiet currents billowing under the surface. there is a shared sense of belonging, of being connected to something bigger than ourselves. She is as in a field a silken tent
At midday when the sunny summer breeze
Has dried the dew and all its ropes relent,
So that in guys it gently sways at ease,
And its supporting central cedar pole,
That is its pinnacle to heavenward
And signifies the sureness of the soul,
Seems to owe naught to any single cord,
But strictly held by none, is loosely bound
By countless silken ties of love and thought
To every thing on earth the compass round,
And only by one’s going slightly taut
In the capriciousness of summer air
Is of the slightest bondage made aware.

thank you to the woman who shared this poem with us under the curtain. you seemed familiar to me, like i knew you from before. i have no doubt that we are, in some way, connected.